Below is a reprinted blog post penned by Kylee Webster in July of 2013 on her blog, The Dancing Queen. Over the next few weeks we will be reprinting her posts to highlight the resilience and positive spirit of those facing even the most devastating of life’s challenges.

We all know that feeling that we get when we return home from a LONG, RELAXING, and fun-filled vacation and we realize that the vacation is over and the next day we have to go back to work. For most of us, this is never a good feeling. Well today I myself return to work after my own four month, fun-filled vacation. Type of work: cancer patient. Place of employment: infusion center at a hospital.

I last finished cancer treatment in the beginning of February 2013. Shortly after, I met with my medical oncologist in the beginning of March 2013 for a CT scan to check and see if the operation and treatment had worked. Well it did! On March 1, 2013 I was told that there was No Evidence of Disease in my body and my oncologist told me that he would not have to see me again for three months for a repeat CT scan. Three months?! What was I supposed to do with myself for three whole months with no treatment, no surgeries, and no doctors appointments to go too.

It took a few days for the good news to settle in. I was in shock. After all of these months, I was finally cancer free and I was going to get a vacation from cancer. After the initial shock began to wear off, I began planning. Planning trips with my family and friends. Making up for the time lost when the cancer was controlling my life.

And traveling I did!! I lived life like a gypsy and I loved every second of it. I will be honest. My cancer was always in the back of my mind. I thought about it everyday. But I only allowed it for just a short second or minute. And then I would stop myself before it consumed me. Because if I didn’t stop the thoughts, that meant the cancer was still winning and ain’t nobody got time for that!

After many weeks of living life to its fullest, my three month appointment check-up seemed to be here in the blink of an eye. On June 7, 2013, four words changed everything…”The cancer is back.” Back in my lungs. And back with a vengeance. After a few expressed profanities and a few tears shed from myself, I then looked at my oncologist and said, “Ok. What’s the plan?” Which brings me to today. I will be starting a clinical trial that will hopefully include the miracle cocktail that stabilizes, shrinks, or kills this cancer. So today I rejoin my battle against sarcoma cancer. 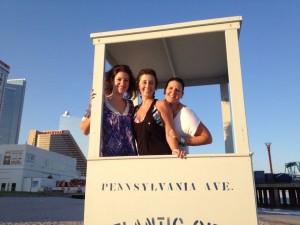 But let me be clear. Cancer does not define me. I am a daughter, a sister, an aunt/godmother, a granddaughter, a niece, a cousin, and a friend. These are the roles that most importantly define me. But if I am going to be honest with both myself and with all of you, I must include another role in my life…cancer survivor.

Kylee Webster was born on May 15, 1979. Passionate about helping others, Kylee earned both bachelor and master’s degrees in psychology from Towson University, and went on to pursue a career as a drug addiction counselor in Harford County, with focus on adolescent therapies.

Kylee was diagnosed with sarcoma in September 2011. She underwent more than 15 rounds of chemotherapy, more than 30 rounds of radiation and several major surgeries. Throughout her  treatment, she amazed every person who knew her or met her. She was brave. She was courageous. She kept a smile on her face and never let her fighting spirit and attitude waver. She began documenting her journey with a blog titled “My Dance Through Cancer” and showed the world that in addition to all of her other  talents, she was a fine writer too.

After battling her disease for over two years, Kylee earned her angel wings in October 2013. Kylee’s Dancing Angels was established to give something special to sarcoma patients, while keeping Kylee’s memory and spirit alive.