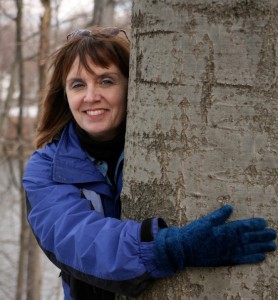 Barbara Olson, MSW, LICSW, is a nature photographer and docent at Henry David Thoreau Farm. She recently retired from her position as Dialysis Social Worker at Massachusetts General Hospital.

I met Barbara in Concord, Massachusetts, on a bright October day at a friendly café on a quaint, bustling main street. Enjoying my bowl of butternut squash chili at the counter on my lunch break, I noticed a woman about my age smiling at me. In seconds, we were chatting about Concord, Walden Pond, and Thoreau’s writings. Barbara was pleased to tell me she was a docent at Henry David Thoreau’s famous farm nearby, even though she lived closer to Boston and worked full time as a social worker at Mass General Hospital. On weekends she was a birdwatcher, photographer, history buff, hiker, explorer—so much more than a social worker.

What struck me about our conversation was her joyous dedication to this historic town, her love of Walden Pond and the writings of Thoreau. Her warm, genuine contentment radiated from her sense of place, sense of belonging, and sense of discovery, and invigorated me just listening to her story. I’d recently moved to the Boston area, and was already doubting why I’d moved here after my disappointment with a new job.

But I found a message in Barbara’s story.

Though a native of Michigan, Barbara had made Massachusetts her home in the ways that nourished her independent spirit and zest for learning and exploring. Clearly, from her story, it heartened me to hear it was not about our jobs, but about loving where we live.

Within a year, we became friends. (Yes, I did stay in Massachusetts.) I invited her for an interview not only because I’d been so touched by her story of how Walden Pond had inspired her, but I was intrigued that she had never burned out during her decades of social work with people in pain and distress. Barbara had overcome compassion fatigue, big city fatigue, and even world fatigue by making Walden Pond her sanctuary—her own, private paradise.

What first attracted you to Walden Pond? 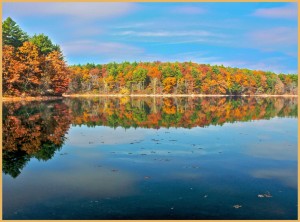 Barbara:  I’d heard about the historic significance of Walden Pond (actually a lake and the deepest in Massachusetts), but at first, I really just wanted a place to swim outdoors. That was 30 years ago! Going there most weekends all these years, swimming in the mornings alone, I developed a deep relationship with the pond itself, the wildlife of the pond, and the surrounding woods.

How does a visit to Walden Pond restore you?

Barbara: As a full-time clinical social worker at Mass General Hospital, my quiet times at Walden Pond on weekends have been essential to keeping my life in balance. Even before I step into the pond for my morning swim, I’ll sit on a rock at the pond’s edge, and get oriented to my surroundings. Before I do anything, I need to settle in, to be still, to watch the birds, and listen to their calls. Though I’ve only been a birder for a few years, I find recognizing and appreciating bird songs brings another dimension to the wooded surroundings, and definitely pulls me away from the chatter in my head. 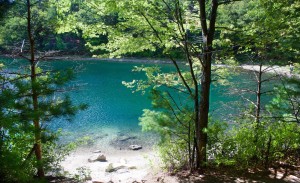 After taking my time sitting on the rock, I step slowly into the pond. Not only is the deep water cool and refreshing, but by swimming leisurely around the edges of the pond, watching the fish, turtles, and dragonflies, I can empty my mind, and be present to life right in front of me. The turquoise, blue and green colors of the water, the sunlight dancing through the trees and reflecting on the pond, the vibrant birdsong, the wide open sky above me—all give me a sense of peace. There is nothing quite like being in the moment, your mind open and attentive to the natural world around you. I can feel my thoughts slowing down, my mind calming and clearing.

This weekend routine has been a form of respite that helped me transition from my busy world of “doing” and into the quiet of nature. As a care provider for patients and their families, I know I needed to make time to nourish myself as well.  This year I retired from my long-time position at the hospital. Now I have even more time for enjoying and observing the outdoors. My relationship continues to deepen and grow with Walden Pond and with nature in general.

Have you always liked swimming and being by water?

Barbara: Yes, that’s true. I grew up in Michigan, near Elizabeth Lake, in Waterford Township. During my childhood years, I swam almost every day of the summer. It was so easy to walk or ride my bike to the lake. My happiest memories are about the simple pleasures of a rainstorm. I would throw on my bathing suit, run outside in the rain and hurry to watch the water rushing through the culverts of the road. The neighborhood kids and I would try to float sticks and other objects on the racing waters, and marvel at how they would speed through the culverts and off into little streams.

Another memory is how I loved butterflies! I could spend hours just watching them hopping from dandelion to dandelion in my backyard. At one point I tried to capture them in jars so I could study them, but I soon learned how this was not good for them, and gave that up.

And I remember naively forming bird nests from fresh cut grass after my Dad had mowed the lawn, with the hopes that a bird would come and roost. I love the imagination of a child, which sadly as adults we tend to lose.

I was an only child until age 11, when my parents adopted my sister. In those earlier years, playing by myself, I hardly ever felt alone, as my relationship with nature was so strong. It was pure joy to grow up by a lake. I’m grateful for having these experiences as a core part of myself—the oldest part of me—my way of feeling joy.

Has your passion for Walden Pond led you to new networks and interests in the Concord area?

Barbara: Because I enjoyed the wildlife there so much, I developed my calling as a nature photographer over the years. I’m pleased to say that my Walden Pond calendars and cards are sold at retail outlets and historic landmarks in Concord. It’s not surprising that I also grew to appreciate the works of Henry David Thoreau. Four years ago, I became a docent at the Thoreau Farm, and once a month I serve as a tour guide. I meet wonderful people from all around the world who have been inspired by his writings. 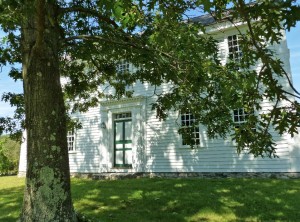 What a beautiful connection with this place you have, Barbara. Walden Pond started out as just a place to go for a swim, and 30 years later, it’s become a core part of who you are. Do you want to add anything about your special relationship to Walden Pond?

Barbara: Yes, I have a story that sums up how I got the message that Walden Pond was the right place for me. It’s one of those synchronistic, or Kismet experiences when you just “get it.” Here it is:

One day, near Valentine’s Day in February, after a snowstorm, I walked to a ridge and took pictures of a glorious sunset glowing over the wide, frozen pond. Later at home, I was curious to see how the pictures of the winter sunset turned out, and I immediately uploaded the photos to my computer. Only then did I notice the enormous large letters etched in the snow blanketing the pond. The letters spelled “I love you.”

I could hardly believe it. Someone with their boots had meticulously carved out these words for their beloved as a Valentine’s Day message—but I sensed that Walden Pond itself was also saying “I love you” back to me!  It was so heartening to see these words sparkling on the snow in the brilliant sunset. It felt like a special Walden Pond Valentine for me!

Wow, Barbara, now that’s a sign if there ever was one! I love it when we know in our bones just how precious a place can be, real Heaven on earth. Thank you so much for telling me what Walden Pond means to you. I think I’m going to read Thoreau’s Walden Pond all over again.

Barbara: Thank you for letting me share my stories with you!

For More about Barbara Olson’s Photography 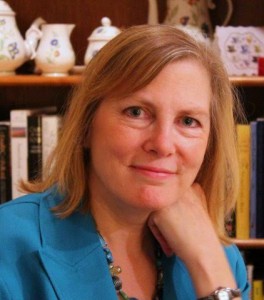 Val Walker, MS, is the author of The Art of Comforting:  What to Say and Do for People in Distress(Penguin, 2010), and a Nautilus Book Award Gold Medalist in 2011. The Art of Comforting was listed as recommended reading by the Boston Public Health Commission’s Guide for Survivors of the Marathon Bombing. Val’s articles have appeared in Whole Living Magazine, AARP Bulletin, Coping with Cancer Magazine, and other national publications. Formerly a rehabilitation counselor, she now works as an activities specialist leading groups for seniors with Alzheimer’s, and other groups with disabilities. To learn more about Val you can visit her website, The Art of Comforting.