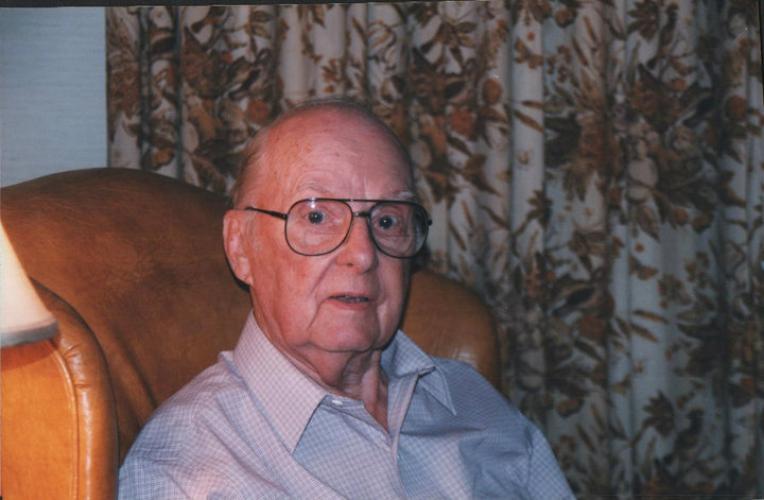 My grandmother, Edee, spent a lot of her time researching the ancestry of both the Rogers and Paul families. Since no internet existed at the time she had to travel to Annapolis to research court records. Her efforts produced a family album for both sides that go back to the 1700's. In the Paul family album she wrote a page of the highlights of Bernie's life but did not do the same for herself. Here is what she had for Bernie:

Bernard Henry Paul was born on April 22, 1907 in a private hospital on Charles and 28th Street in Baltimore, MD. At the time it was called Bidler and Sellman, later named Doctor’s Hospital. He then lived on Lanvale Street and later moved to 708 Gilmore Street where the family stayed until they moved to Linthicum in 1919 at the age of 12. He remained at that home, 414 Hawthorne Road, Linthicum, MD until he was 94 and had to move to an assisted living facility.

He attended school at #78 until the 6th grade but finished 7th and 8th grade at Linthicum Elementary. He went to City College for one year and three years at Severn Preparatory School in Severna Park, MD. He then attended the Maryland Institute of Art for four years, one being a Post Graduate course. He graduated in June, 1929 and won the municipal art prize, which was $50. Bernie majored in stagecraft.

In 1925 he met Edith Georgia Rogers, they worked puppets together, and were married at the Hawthorne Road home on April 17, 1930. They took a short trip down the Shenandoah Valley as far as Harrisonburg, VA.
In 1934, they gave the first professional marionette performance at the White House in Washington, DC while President Franklin Delano Roosevelt and family were there, at a party for grandchildren, Sistie and Buzzie Dall and their little guests. They found Mrs. Roosevelt and her daughter Anna Dall very charming woman. (Sharon’s note added – I remember Bernie telling me that he didn’t have the correct electrical plug to be compatible with what the White House had – AC vs DC, so they couldn’t use their record player. Mrs. Roosevelt took Edee up to the children’s bedroom in the private residence to get a record player that would work. She also showed Edee the kitchen area to show her how the conditions weren’t the best.)

During World War II Bernie worked at the US Post Office as Assistant Post Master giving marionette performances after hours at camps, schools and churches nearby. Because of the war they could not travel over the Eastern section of the country like they were used to.

He had a lot of hobbies that included wood working/carving, jewelry making, collecting music boxes, old swords, butterflies, buttons, masks, bells and gongs, whales, Oriental objects, ancient puppets, soldiers. He also loved photography and had a darkroom in the basement.

They started television with a commercial for WMAR in November, 1947. Then in 1948 gave performances over WBAL in January until they were officially on the air twice a week, Monday and Wednesday 7:15pm to 7:30pm. They changed to Tuesday and Thursday when Hutzlers starting sponsoring them in 1949. Their sponsors were Nestles Cocoa and Planters Peanuts. They finished with television in 1958 but still performed live at the Hutzler’s stores.

In 1964 they bought a small cottage on Great Island, Maine near Quahog Bay and named it “Cachalot.”

On March 19th, 1965 Bernie was a guest on the tv show, “To Tell the Truth.” No one on the panel guessed he was the puppeteer in question due to his inability to spell well. After he didn’t spell the name of a well known puppet correctly he won the $400 prize.