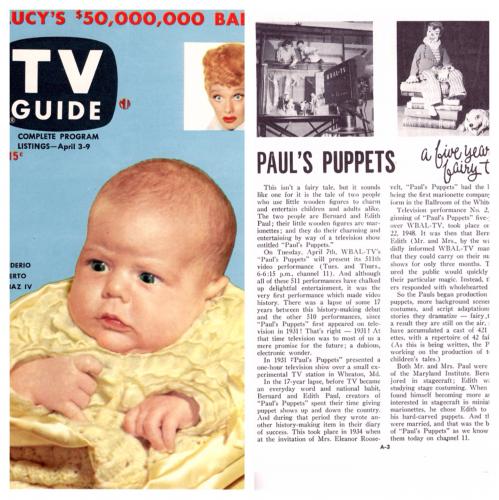 Featured in the first issue of TV Guide

Edee and Bernie’s show, Paul’s Puppets, was the featured article in the first edition of the TV Guide, Baltimore edition. The text is as follows:

Paul’s Puppets – a five year fairy tale.
This isn’t a fairy tale, but it sounds like one for it is the tale of two people who use little wooden figures to charm and entertain children and adults alike. The two people are Bernard and Edith Paul; their little wooden figures are marionettes; and they do their charming and entertaining by way of a television show entitled “Paul’s Puppets.”

On Tuesday, April 7th, WBAL-TV’s “Paul’s Puppets” will present its 511th video performance (Tues. and Thurs., 6-6:15pm, channel 11). And although all of these 511 performances have chalked up delightful entertainment, it was the very first performances, since “Paul’s Puppets” first appeared on television in 1931! That’s right – 1931! At that time television was to most of us a mere promise for the future; a dubious, electronic wonder.

In the 17-year lapse, before TV became an everyday word and national habit, Bernard and Edith Paul, creators of “Paul’s Puppets” spent their time giving puppet shows up and down the country. And during that period they wrote another history-making item in their diary of success. This took place in 1934 when at the invitation of Mrs. Eleanor Roosevelt, “Paul’s Puppets” had the honor of being the first marionette company to perform in the Ballroom of the White House.

Television performance No. 2, the beginning of “Paul’s Puppets” five-year run over WBAL-TV, took place on March 22, 1948. It was then that Bernard and Edith (Mr. and Mrs. by the way) candidly informed WBAL-TV management that they could carry on their marionette shows for only three months. They figured the public would quickly tire of their particular magic. Instead, the viewers responded with wholehearted acclaim.

So the Pauls began production on more puppets, more background scenery, more costumes, and script adaptations of the stories they dramatize – fairy tales. As a result they are still on the air, and they have accumulated a cast of 421 marionettes, with a repertoire of 42 fairy tales. (As this is being written, the Pauls are working on the production of ten more children’s tales.)

Both Mr. and Mrs. Paul were students of the Maryland Institute. Bernard majored in stagecraft; Edith was busy studying stage costuming. When Bernard found himself becoming more and more interested in stagecraft in miniature and marionettes, he chose Edith to costume his hand-carved puppets. And then they were married, and that was the beginning of “Paul’s Puppets” as we know and see them today on channel 11.