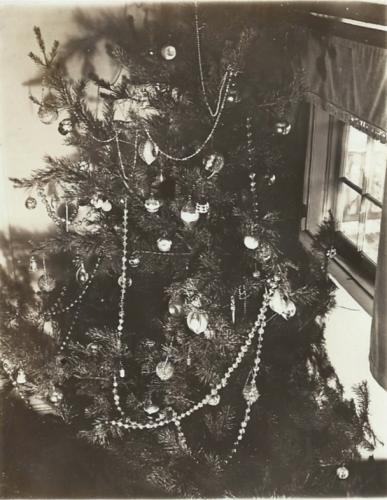 Every year when I decorate our Christmas tree certain ornaments bring back memories of Christmas time on Hawthorne Road. Some of these old ornaments go back to my father’s childhood and were on our tree during my childhood.

Christmas decorating at 414 Hawthorne did not start until after Peter and I went to bed on Christmas Eve. It was always a surprise to wake up on Christmas morning, go downstairs and discover the tree with a train running around the base, along with a stack of presents. I must admit that at that moment the stack of presents was more interesting than the tree or the train. As with most things in our household gift opening was a controlled situation. Bernie became Santa and dispensed the gifts one at time. We all watched as that gift was opened, the happy look and the thank you shared before Santa handed out the next gift. Adults each got one or two gifts while Peter and I got maybe three or four. At the end of the gift dispensing it was time for breakfast.

Preparation for Christmas actually began around Thanksgiving when the fruitcake was prepared and baked. When it emerged from the oven it was soaked in a small amount of brandy, wrapped in a cloth and put in a round tin box to begin its aging process. The bottle of brandy must have lasted for years because it only emerged from the pantry that one day out of the year. Cookie baking began shortly after the fruitcake was baked. Peter and I got to help decorating the sugar cookies by adding the colored sugar sprinkles after the various star, crescent moon, pine tree, and Santa shapes were formed with the metal cutters. We also got to use the cookie press to squeeze out the various molded shapes of the spritz cookies. Somewhere along the line hard candies were purchased, but not opened until the big day.

Many of our Christmas trees came from Markel’s farm on Andover Road. There were several rows of them planted between what is now the Little League ball field and the northern edge of the Andover swimming pool property. With saw in hand, Bernie & Henry would walk up and down the rows until just the right tree was found, cut, and loaded in the trailer for its trip to our house. When this group of trees got too tall other sources of supply became necessary. One of these sources was the woods at the end of Hawthorne Road. Over the years the tree was set up in different parts of the first floor. In the pre-children year of 1932 it was placed in the corner of the front hall, beside the entrance door. This area would later become the “powder room”, AKA toilet & sink room. By the time I first remember it, the living room was the location. Later it moved to the corner of the dining room. By 1966 it was much smaller and held in a clay pot from Williamsburg that sat atop the TV in the living room.

The pre-Christmas period was a very busy time at the Linthicum post office as well as for Paul’s Puppets. Kernan’s Hospital for Children, Happy Hills Convalescent Home, and William S. Bauer School for Crippled Children all scheduled performances, as did many local schools. Edee & Bernie sometimes made window displays for Baltimore department stores, Hochschild Kohn & Co. & Hutzler Brothers. The post office sometimes had so much mail that a second home delivery was made on some days.

Some of the toys that Peter and I got were factory made. The cast iron Huber steam roller has been a part of my life for so long that I can’t remember life without it. It may have been a Christmas present. During WWII metal and rubber were extremely limited so toys had to be made of other materials. Wood and paper were the materials toy makers had to rely on. One year I got an aircraft carrier which was made of wood, with its deck details printed on glossy paper stock. There was a small metal spring hidden in a slot in the deck that was used to launch the tiny airplanes.

Bernie hand-made some of our toys. One of the war year Christmases he made me an airplane scooter. The scooter part was metal, and may have originally belonged to some other boy. To this he added projecting wooden wings, painted military olive drab with air force insignia added. He probably saw the idea in Popular Science or Popular Mechanics magazine which featured craft ideas. It was a fun outdoor toy, but a bit difficult to maneuver so it got limited use. Another Christmas Bernie made us cast lead soldiers which he carefully painted in two different colored uniforms. Peter was not very interested in playing with his set so the two armies were consolidated under my command, where they engaged in many battles.

Our O-gauge Lionel train set originally encircled the tree on the floor in the living room. It was composed of a steam locomotive with two passenger cars and a set of metal freight cars that could be pulled in place of the passenger cars. When I was a bit older the train garden moved up to the second floor front room. A sheet of new plywood was purchased to attach the tracks to. ( Every time I smell plywood I am reminded of that train platform). I used sawdust, that came from cutting out puppet body parts to make grass for the train garden. An envelope of Rit™ dye in a bucket of water transformed it from tan to green. Accurate scale was not important in this miniature town. The cardboard church was HO-gauge so O-gauge cast metal people who inhabited the town could never fit through the door. A few years later I wanted everything to be in scale and at that time HO-gauge trains were becoming popular, so that is what I wanted. That Christmas I received an American Flyer HO train set. With it I started creating my year around set up model layout. A friend had a used HO-gauge Varney™ Docksider locomotive for sale for $15. I was somehow able to convince my parents that I should sell the old O-gauge Lionel trains to the Waters’ family across the street for $15, and then buy the Docksider. Today the Lionel sets sell for over $100 while the Varney locomotive might bring $15 on a good auction day. Selling the Lionel set is one of the things I wish they had not let me do.

Christmas presents between the Paul adults were usually interesting and unusual. There was a lot of silver involved. Bernie liked jewelry so Edee often gave him some. For Christmas 1942 she gave him a silver ring with a black warrior head carved of stone. After they became friends with Clifford Russell in Maine I received several of his silver tie clips. For Christmas 1962 Henry gave Mary the grandmother clock that we now have in our dining room.

By the late 1950’s Bernie & Edee were doing puppet shows for Colonial Williamsburg every December. One year they saw a hand-carved wooden nativity set that Williamsburg had commissioned from a Mr. Leynoner. He was a refugee from Hungry, who had settled near Southampton Pennsylvania. They contacted him and had him carve them a smaller-size se,t. It was displayed on the fireplace mantel every year, beginning in 1964. A couple of pieces of driftwood from Maine became part of the setting.

The only exterior Christmas decoration on the Paul house was something on the front door, along with a string of bells on a leather strap. No electric candles in the windows. The porch ceiling light was on until bedtime to show off the door decoration.

Christmas decorations went up on Christmas Eve and came down on New Year’s Day.

Just like eating lunch at exactly 12 noon and dinner at exactly 6: PM, I grew up thinking the entire world did Christmas exactly like the Hawthorne Road Paul's did.