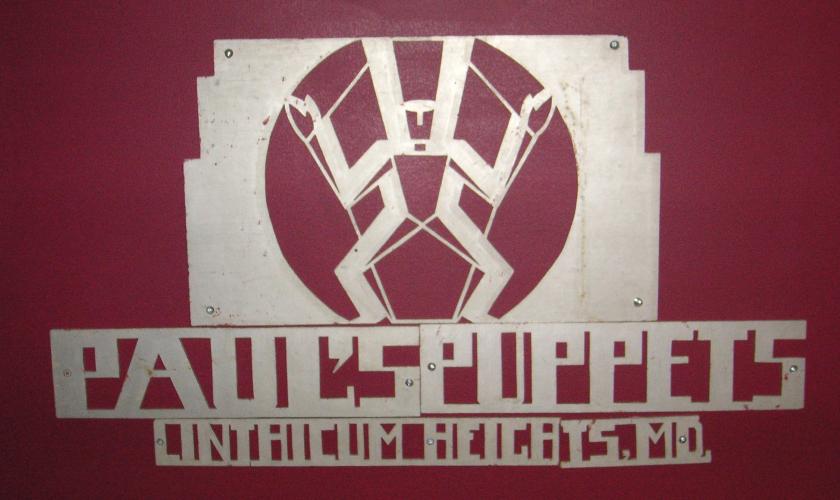 Securing the booking for a show was only the first step in preparing to present the Marionette show.
Getting all of the equipment to the show’s location was crucial, and there was a lot of equipment to move. Here is the breakdown of the equipment.
1- The stage which consisted of:
A- A gray plywood floor about 36” x 72”.
B- The black wooden ‘bridge’ which is where Edee & Bernie stood to operate the marionettes, about 15” x 72”.
C- The waist-high wooden shelf that held the electric and sound equipment and kept them from falling backward off the bridge, about 15” x 72”.
D- A set of wooden ladder steps to climb up to the bridge.
E - A bundle of metal pieces that formed the frame work for the stage.
F- A bundle of wooden frame pieces that supported the front curtains and from which the marionettes were hung.
G- The footlights for the front of the stage.
H- Black velvet curtains to cover the front of the stage.
I- A black velvet curtain for the rear of the stage.
J- The stage curtain with track.

2- The sound system speakers and amplifier: In a black wooden case about 14” wide, 15” high and 12” deep, which came apart to form two 6” deep speaker sections. The amplifier was transported inside the case.

3- The light control panel box: A custom made wooden box with removable lid that contained the power cord. The face of the panel was burnished metal with a series of switches that controlled the spotlights that plugged into outlets, and sound system. There was a small 6 watt bulb that illuminated the panel. About 10” wide,14” high and 8” deep.

5- Scenery and props: In a case about 30” high, 48” long and 12” wide, with a lid that opened on the top. Some of the velvet curtains and the spot lights were carried in this case.

6- The marionettes : In a case about 20” x 30” x 8”. Some of the curtains were carried in this case.
The way this equipment was hauled to and from the location of the show changed over the years. Originally a gray, wooden trailer with sides about 18” high and a drop down tailgate was used. This trailer had been built using an axel and spoke-wheeled tires, probably from a circa 1920’s automobile. It had a snap-on canvas cover to protect the cargo.

In the mid to late 1930’s it was replaced by a new covered trailer with a permanent plywood top. The original trailer was stored under the west end of the front porch and continued to be used to haul horse manure for the garden and wood chips from Johnson Lumber Co. in Glen Burnie for the chicken houses.
Each side of the new trailer contained Masonite™ signs with the Art Deco stylized puppet logo that Bernie had designed. He cut out the design on his jigsaw and then screwed the signs to the trailer.

During World War II gasoline was rationed, so travel was very limited and everyone did what they could to save gasoline. In 1941, just before the start of the war, Bernie bought a new Plymouth 4-door sedan. Gasoline rationing began on the east coast in May of 1942 and most car owners were issued a book of “A” stamps and a ”A” sticker that had to be mounted on the windshield. With the “A” stamps you could only purchase from three to five gallons of gasoline per week. This probably motivated Bernie to come up with something that used less gasoline than hauling the trailer. His solution was a plywood box that extended out of the rear of the Plymouth’s trunk. He named this “The Bustle”. The Masonite signs were removed from the trailer and attached to the Bustle, serving as an advertisement when they did shows.

By the time the war ended and new automobiles were once again available, Bernie was accustomed to carrying the puppet equipment in the car, so he did not want to revert to using a trailer. Nash introduced their 1948 Ambassador ‘Suburban’ as an upscale version of the old station wagon models. It featured real solid ash wood door framing around mahogany plywood panels. The ‘Suburban’ also featured real red leather seats, and the ‘Bed-in a- Car’ system that Nash introduced in 1936. This allowed the rear seat to fold down forming a bed where your feet projected into the trunk space. With the seats folded down there was enough space to slide the stage floor through the trunk and into the rear compartment. With a bit of adjusting all of the rest of the equipment could be carried in this space. For the front doors Bernie had his trademark design made by a truck sign company in Pennsylvania in chrome-plated metal. The Nash dealer installed the new signs on the his new car, and they served as a continuous advertisement for Paul’s Puppets. From that point on every new car he bought got the signs transferred to it as part of the purchase deal. Only 130 of these 1948 Suburbans were produced. At that time they retailed for between $1,929 and $2,239. In May, 2016 one sold at auction for $63,250. The Suburban came with a chrome ‘Winged Lady Goddess’ hood ornament. Bernie’s next Nash featured a George Petty-designed ‘Flying Lady’ chrome ornament. She moved from car to car along with the signs up to his last Volvo.

Edee kept a record of special equipment required for each place they gave a show, including the need for a longer power cord, extra velvet curtains to block in the sides of the stage, or the need for someone to control the house lights from another part of the room. Every customer was given the list of pre-requisites which were: A stage or strong platform with these minimum measurements: 12 ft. wide across the front, 9 ft. deep, 2 ft high, with a ceiling clearance of 9 ft from the floor of the stage or platform. An AC electrical outlet and complete use of the stage two hours before the show and at least an hour after the performance. Even with this list a new place could provide an unwanted surprise, such as an electric outlet that lost power when the house lights went off, or a ceiling light that would hit them in the head.

Assembling the stage was a carefully choreographed routine. Each one had things that they did separately, and things they did together. All of the 1/4” bolts used to assemble the stage were color coded with enamel paint, one set for Edee and another for Bernie. They had ratchet screw drivers to tighten and loosen the bolts and wing nuts were used to speed up the process. They each worked on opposite sides while assembling the stage frame. Once that was completed, Bernie set up the stage lights and sound system, then ran the cords to the control panel. Edee took the marionettes out of their individual zippered muslin bags and hung each one in the proper location on the wooden bars flanking the stage. While the show was going on they had to be able to reach over and grab the controller for the puppet that is about to go on stage, without looking away from the puppet they were operating onstage.
Hanging backdrops and other hanging scenery was made of painted muslin and netting. The free-standing sets were made of Upson™ board, a dense 1/4” thick cardboard that could be cut to shape and needed no wooden support framing. There were small metal cleats on each side of the stage floor that metal angle irons, bolted to the Epson board set piece, could be inserted into, keeping the scenery from falling over. All of the scenery as well as any furniture or props were carefully placed on the floor on each side of the marionette stage. There were only a few minutes between scenes, and Edee and Bernie climbed down the steps from their side of the bridge to make the quick scene change setups.
This setup process took up to two hours depending on whether there were unexpected problems. If everything went well, all was ready at the time the performance was scheduled to begin.

When the show was over, the dismantling process began, starting with putting each marionette back in it’s zippered bag complete with identification tag. When everything had been disassembled and packed into its case or bundle, the car was loaded and Edee and Bernie headed back to 414 Hawthorne Road. Once they got home, the car needed to be unpacked and all of the equipment stored so it would all be ready for the next show date.