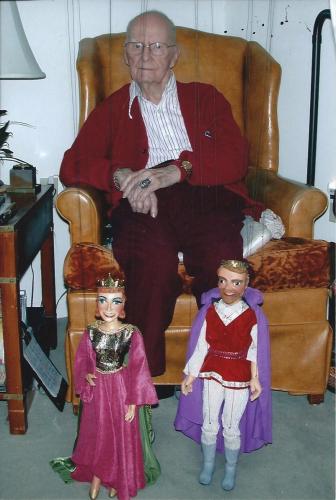 Bernie continued living at 414 Hawthorne after Edee passed away. After all it had been his home since he was a teenager. Converting the dining room into his bedroom was not even an option, when I suggested it. It was always the dining room and his bed room was upstairs where it had always been. So every night he made the trip up the steps, with the help of the chair-lift he had installed for Edee.

One night, while standing in front of the refrigerator, he passed out or fell. It was not until the next afternoon that we found him on the floor where he had been since the night before. We took him to the emergency room at North Arundel Hospital where they dealt with his medical needs. At that point we knew that he could not continue to live alone in that big house, but could we convince him of that. Actually he had already decided that he did not want to go back to Hawthorne Road.

Heart Homes, located on Fort Meade Road in Linthicum, would be a convenient location if space was available. When I stopped in, they did have a room available, so I made arrangements for him to move there when he was released from the hospital. Bobbi Watson, the director, suggested we bring a few familiar items to furnish his room. Just before move-in day Bobbi said that another room was also available if we wanted it. It was at the far end of the hall and had two windows rather than just one as in other rooms. This was much better, so we furnished it with his chair and side table from the living room and his television set, along with a selection of clothing.

Bobbi had told us that the first few days, or weeks could be difficult for new arrivals, and suggested we not make visits for a couple of days. As expected, the first night there Bernie told Bobbi that he was just going to go to bed and stay there until he died. Bobbi responded “not on my watch are you going to do that!” “Be in the dining room for breakfast or I will come get you”. That was the beginning of a beautiful relationship. Bobbi was just what he needed to keep his spirit up, and his fighting Irish juices flowing. And yes, he was in the dining room the next morning.

Not having to fix meals was a real plus for Bernie. For most of his life, the kitchen at Hawthorne Road was just a space he passed through to get to and from the back door, or the studio. It was not until Edee started to have memory problems that Bernie actually began to spend time in the kitchen, learning the basics of cooking, while helping Edee. When Edee went into the nursing home Bernie was on his own with food preparation. When Ann Cramer brought him a microwave, set it down on the counter and said “Here you need this”, a whole new adventure of eating suddenly opened up. The dining room at Heart Homes was so much better than the usual Stoffer’s frozen dinner.

Having to lug his laundry down to the basement and deal with the washing and drying process was something else that he now did not have to deal with.

He kept up to date with what was going on in the rest of the world with his subscription to the Sunpaper and news on TV, as delivered by Denise Koch. Denise was his news anchor of choice because she was “cute’. One time he ask me about stem cell research, which was then a hot topic in the news. Well, he knew a whole lot more about that subject than I did.

Bit by bit Bernie would ask me to bring him some item from 414 for use in his room. Various puppets were requested, along with knights in armor, a bronze nude figure or two, and even an elephant head plaque. Slowly his room began to look more like home.

Having two windows in his room allowed him to watch what was going on in nature. His squirrel-proof bird feeder was placed outside the window. His chair facing the window provided lots of bird watching.

It was really all of the human visits that he most enjoyed. He had almost daily visits from family, friends and neighbors. David and Sharon ( grandchildren) tried to visit regularly. Another grandson Thomas, AKA ‘Officer Paul’, would always grab the attention of the other residents when he showed up in uniform, complete with his side arm, and proceeded down the hall to Bernie’s room for a visit. A visit with Thomas was like a personal stand-up comedy routine. Everyone in the room, except Thomas, was laughing during his stories of a Baltimore City Policeman’s daily adventures on the job. One time when Rebecca was visiting and Tom showed up, he had both of them laughing so hard they had to hold their stomachs.

I think the main reason Bernie had so many people visit him was because he did not talk about his problems. He wanted to ask questions and listen to what his visitor had to say. He made lists of questions he had for each one as he thought about them. When we stopped in there would be the piece of scrap paper headed ‘Carroll & Larry’ followed by several headings he wanted to discuss. One time he told us that a new resident had moved in. I ask how old she was? He said “I don’t know, but she is older than me”. I said “no one is older than you”. To which he replied “Go home!” Not thinking about his own age was one of the ways that kept him from thinking or acting old.

Some people never adjust to being away from their home, but I think Bernie knew that assisted living was the right place for him at that stage of his life, and he adjusted well enjoying the positives , without dwelling on the negatives.