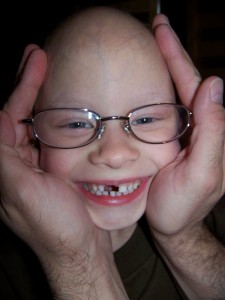 Many people know that my daughter, Juliana, has been fighting cancer since 2007. She beat it then the cancer came back in March 2011 and, again, in June 2012. She has been on two kinds of maintenance chemotherapy for months. She had some pain in her chest and leg. Just recently, we noticed her right eye began to droop. We knew something was wrong.

On Monday March 17, 2014 we took her to Sinai Hospital. The following day we found out that a cancerous tumor was wrapped around two muscles in her right eye. Surgery was scheduled for the following day.

I couldn’t believe it. The cancer attacked my baby girl for the fourth time. For days, I felt like I couldn’t move. I felt like I had a five hundred pound weight holding me down. I couldn’t even do my daily radio show. I sobbed. Once Juliana was released from the hospital my wife and I came up to our bedroom to talk and I held her as she sobbed in my arms. Not again…not cancer…again?!?!

A few days later, Juliana emailed me a little poster that said, “Keep calm and Stop Worrying.” What? Keep calm and stop worrying? Certainly, Juliana doesn’t know the severity of her situation as the doctors said there is no long term cure for her. Still, this little champion was encouraging her panic-stricken father who doesn’t want to lose his little girl to this horrible disease. 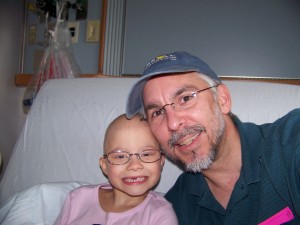 What do you do when you don’t know what to do? The easy answer is to take control over your thoughts. Is that easy? No way is it easy! By March 21, 2014 I was able to pick myself up but not until I did something that has worked in the past. I started contacting thousands of people to pray for Juliana and our family. There are some struggles that you cannot afford to carry alone. This is one of them for our family.

When you leverage what you cannot do alone with the power and strength of others the load that you’re under gets a little lighter. Too often, I have found, people do not want to reach out and say, “I need help!” This is a huge mistake! I don’t know of anyone who is wired to handle all of life’s struggles. Allowing other people to help gives people a chance to make a difference in your life.

Thousands of years ago the Biblical character Moses was in charge of a great battle. He was so tired. He was losing strength very quickly. Two of his friends, Aaron and Hur, stood beside him to encourage him and to strengthen him. Everybody needs “Aarons and Hurs” in their life. 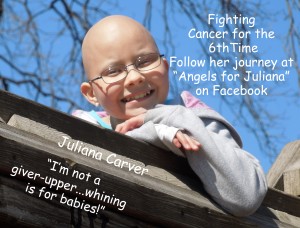 Author Mary E. DeMuth writes, “We grow when the walls press in. We grow when life steals our control. We grow in darkness.” There are some people who have a “calling” to be such encouragers. Statistics tell me that about thirty to forty percent of the public are encouragers. They are everywhere but you will never know it until you have the courage to open up your heart to people worthy of your trust.

Author Jon Walden said, “Struggle is proof that you haven’t been conquered, that you refuse to surrender, that victory is still possible, and that you’re growing.”
You don’t have to carry your struggles alone. Please pray for Juliana Carver.
“I Believe in you!” ® 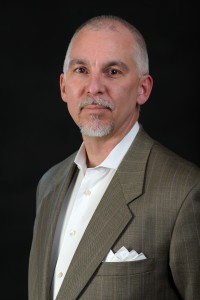 John Carver was born in Baltimore Maryland and now lives in Carroll County Maryland.  John married Tammy in 1988 and after nine years of infertility began adopting children from Russia and Belarus.  Today, they have six children.  Their youngest daughter, Juliana, has been fighting cancer since 2007.  John inspires several thousand people each week using several online tools.  To sign up for his weekly email, email him at johncarver@wildblue.net or check out his website, www.johnwcarver.com